We’d heard many good things about Hoi An and, happily, it lived up to expectations. Beautiful architecture, in particular the lanes of the Old Town and its riverside setting; the vibrant paddy fields; and a gorgeous stretch of beach (An Bang). To boot, Hoi An boasts some of the best eateries and best food we’d had in Vietnam. Unsurprisingly, therefore, our stay of initially a few nights was extended by a further week so we could enjoy exploring the many delights of this fine city.  We were also reunited with our Kiwi friends who had, coincidentally, rented a house on the edge of town and invited us to stay for a while. Happy days. 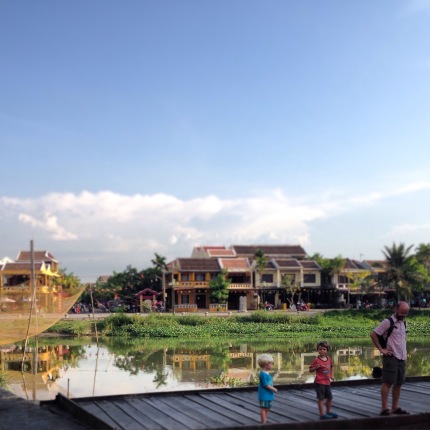 Of the many highlights from that week, though, Sam and my ‘afternoon date’ enjoying a wonderful walking street food tour was the best.  As our friends kindly minded the children, we gorged our way around the city, stuffing ourselves silly on some nine courses of local foods, including White rose, Waterfern cake, Cao Lau and supposedly the best banh mi in Vietnam. I should point out too that despite our adventurousness, we politely declined the fertilised egg containing a duck embryo (Balut) on grounds that it sounded disgusting.  As we walked around between courses, Sam was also afforded plenty of time to window-shop and indeed coveted many dresses and shoes en route. Not so silently, she vowed to return to Hoi An one day with an empty suitcase and her credit card. She did manage to have a couple of dresses made in the time we were there, citing an upcoming family wedding as reasonable justification! 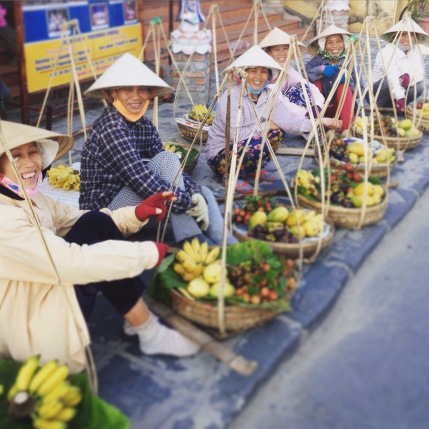 We eventually dragged ourselves away from Hoi An and commenced the Northern leg of our Vietnam tour. Next stop, Phong Nha-Ke Bang National Park – home to the oldest karst mountains in Asia and some of the largest and deepest cave systems in the World. 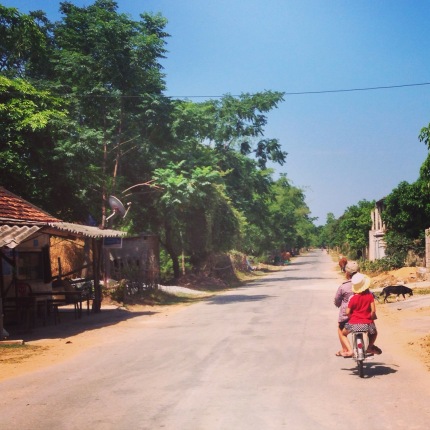 After a day of relaxing (well, I say relaxing, but I had us cycle 20 ish km round the old village of Phong Nha in 35+ degree heat), we headed off on motorbikes in pursuit of The Dark Cave and afterwards Paradise Cave. Whilst the latter provided the classic cathedral-like splendour of a giant cave (all 31 kilometres of it) set in stunning forrest clad karsts, it was the former cave that provided us with the fun and laughter. The Dark Cave and the complex surrounding it was packed with enough surprises to keep us amused for several hours, including zip wire rides into the river (George showed his Mother how to do it!), river kayaking and, the best of all, a cave room with a mud bath so thick, even I was able to float! Once everyone was semi-submerged, we held the childrens’ hands as the head torches were switched off and absolute darkness was enjoyed. The sensation was incredible and brought out the child in everyone!

The following evening, with mud still soaked into our swimmers, we boarded another sleeper bus, this one bound for Hanoi. The inglorious details of this trip have already been provided, so I shall spare them here. Suffice to say, however, we were very pleased and relieved to eventually arrive at our next hostel in the capital. Our arrival was made even more pleasurable by not one but two warm welcomes. The first by Alice, the very friendly manager of our new home, and the second by The Brooks family, who we’d met through an online forum and had arranged to put faces to names and have a fun evening together before they departed the following morning.

Having been on the road for many months now, the childrens’ current appetite and enthusiasm for all things cultural – museums, temples and the like – is not exactly at an all-time high. So, when I suggested we visit Hanoi’s Museum of Ethnology, a large collection of tribal art and artefacts, my expectations were that we’d be in and out within an hour, with the children wholly unimpressed. Fortunately, I was wrong. In fact, we were so enthralled by the exhibits (George included), we managed to lose Tomas momentarily. Once his screams were answered by some helpful Indian tourists on the floor beneath us, we were reunited and learned that he was playing hide and seek – albeit on his own, poor boy!

With a week left in Vietnam, we decided to visit Cat Ba Island & Cat Ba National Park. It was from there we would also be able to explore the famous limestone islands of Halong Bay.

Like other places we’ve visited in Vietnam, Phong Nha, Mui Ne to name but two, Cat Ba is a boom town, which has unapologetically and unsympathetically developed in order to cater for the recent influx of tourists. That said, the surrounding countryside, including the national park, and the several hundred islands peppering the gulf remain the star attractions and rightly so. So whilst the food and the hotels weren’t the finest Vietnam had to offer, the scenery certainly was and we enjoyed several days venturing round the island and exploring the bays.  Unfortunately, our stay was accompanied by the arrival of Typoon Kujira, which aside from shutting the island down for day, reeked only minimal damage and relative normality was restored the following day. The highlight of our time on Cat Ba was the day long boat trip where we swam, kayaked and I hurled myself off a cliff into the bay.

Lastly, it was back to Hanoi for a few days before our departure for Thailand.  It has become customary for us, when we’re preparing to leave a country, to spend this time decluttering our backpacks, replenishing the missing stationery and Lego, completing some much overdue “home” admin and sending a postcard to my nieces in Sydney.  Hanoi was no exception.  Naturally, too, we do retrospective of our last few weeks and, in truth, whilst we enjoyed the last two months in Vietnam, we were definitely ready to leave. It was easy to get around logistically, but I would be lying if I said it was the friendliest place we’ve visited. The occasional touching by locals of young children’s private parts (in order to determine their sex, apparently) was a particularly unpleasant cultural trait of which any travelling parent should be wary. Nevertheless, resounding memories of Vietnam are George and I bouncing down the zip wire together before plunging into the river, a mud bath with the family and Tomas and George showing the Hipsters how to tear up a dance floor in a club in Hanoi!

Good evening, Vietnam. Thailand, we’re on our way back.

One thought on “Vietnam part II”